I have things to do. A list of seven things in fact, which is sure to expand and contract as I simultaneously accomplish tasks and forget things to buy, forget what to pack, and figure out where to store my things I’ll be leaving at home in Nashville. On Friday I leave for Charlotte, NC, somewhere I’ve been before several times, but this time to play at a venue I’ve never heard of.

I haven’t looked at what time my flight leaves and I don’t know where I’ll be past the second stop of the tour. Getting on a plane and leaving for three months has become normal to me now. It doesn’t phase me.
I’m 26 years old and I play music for a living. Since 2010, I’ve been doing something most people only see in movies — driving around the country in a van and playing shows.

I was 20 the first time I told my college professors I would have to miss a week of school to drive down to Austin, TX with my band, Air Dubai, to play the yearly music industry festival, SXSW. Several conversations and a hefty amount of persuasion later, they allowed me to leave desolate Greeley, CO to drive cars we borrowed from our parents and sleep on cheap hotel room floors all the way to southern Texas.

At that point in my “career,” that was all I ever wanted to do. Despite my parents telling me I needed a plan B and my college professors discouraging me from taking gigs, I was completely absorbed by the elusiveness of being in a successful band.

Over the next five years, Air Dubai went on to sign a record deal, release three albums, play hundreds of shows across the U.S. and Canada, sign with a booking agent, a business manager, a lawyer, and the biggest management company in the world. For two years we rented a nice house in south Denver that band money paid for. Not bad for some dudes that met on Craigslist.

We were young, not rich by any means, but supporting six people on money we were making from playing music. In 2014, I accomplished one of my pre-teen dreams by playing Warped Tour with my best friends. We had our own bus and played alongside pop-punk bands I idolized as a young drummer.

During that same year, we released our first full-length album on Hopeless Records and (drumroll..) nothing happened. The label told us the budget for promotion had been used up before the album came out and we were dead in the water. The album we had spent two years working on and promoting was stillborn.

Later that summer, we split ways with our management and the label. After reaching our touring peak on Warped Tour, we returned home to Denver, with nothing but a $40,000 bill for our tour bus and boxes full of hundreds of copies of our album that we didn’t know what to do with.

The glamour was gone and reality hit like a ton of bricks. This part wasn’t supposed to happen. We were a pop band that saw nothing but the Top 40 for ourselves, but our mid-twenties came up quick and we questioned everything.

This life isn’t all glory, in fact the majority of it isn’t. This story is so common in today’s music industry, that it’s almost not worth telling. The part that is worth telling is the in-between. The “where do we go from here?” The stuff that’s typically reserved for montages. I was fortunate enough to get a call for another gig right when I needed it.

“Do you know how to run tracks with Ableton?” Yes.

“Can you fly to Austin next month for a rehearsal?” You’re goddamn right I can.

In January 2015 I started playing drums for The Wind and The Wave. Feeling raw to the promise of the music industry as an artist, I was happy to be hired on strictly as a touring drummer.

When I was transitioning into my role with The Wind and The Wave, it softened the blow of losing a labor of love I had spent years creating. It was similar to the feeling you get when you break up with a long-term boyfriend/girlfriend. Letting go of someone you’ve made so many memories with that it becomes a part of your identity, is extremely difficult. That chunk of who you are gets ripped out and you wonder why you spent so much time on it in the first place. It’s easy to focus on what you’ve lost instead of being grateful for the countless moments of joy and purpose it brought you.

For the most part, I’ve put the regrets of Air Dubai behind me. The thoughts of what could have been and what was supposed to be are gone. The thing that remains are the memories. The places that I got to travel to and the things I got to see and experience with my high school buddies are incredible to me.

We were just a bunch of suburban kids who wanted to do nothing but lock ourselves in the basement and play music, and only a few years later we found ourselves playing in the MTV offices in Times Square, hearing ourselves on the radio, and opening for some of our musical heroes. I watched my little band go from rehearsing in a garage, taking breaks to talk to people who would stop and watch us, to headlining 1500 capacity venues in our hometown.

But the times I remember the most are the times we spent off stage. The countless hours spent in vans and green rooms, hotels and coffee shops. Nights spent awake drinking beer and smoking cigarettes in a city you never thought you’d see.

Most shows are a repetitious, fleeting moment of joy. A brief release of energy and emotion. One hour on stage to validate why I’ve given up so many other “normal” aspects of my life.

Those memories blur together. I don’t remember how Air Dubai’s show went at the House of Blues in Cleveland in 2013, but I remember standing out in the back parking lot smoking a joint with Skizzy Mars, all of us awkwardly fan-girling over this rapper we idolized.

The real shit happens off stage, in the other 23 hours of the day. Bands will come and go. Some shows will be great and others will be horrible. In the morning it doesn’t matter. You get in the van like every other day and drive to the next city.

I live a life of constant upheaval and instability; tirelessly performing the same menial tasks of driving, pushing cases into the venue, setting up, sound checking, playing a show, packing up, and heading to the hotel. But if I were to describe the life I live to my 13-year-old self, I know he’d be fucking stoked. 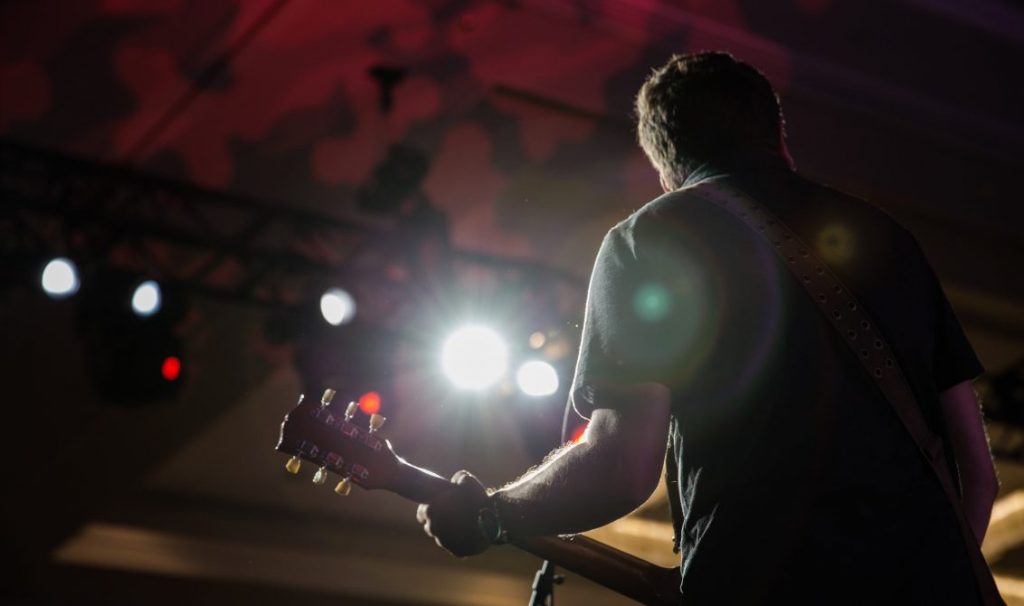 These are the stories I’ll be telling my grandkids. These are the connections with human beings that will never be broken. The mundane, inconsequential experiences that act as the beautiful glue to our chaotic lives.

Like any job, it’s not the hours at work that define who you are. It’s those hours of free will and what you choose to do with them.

It’s not the parts with the bright lights. It’s not the pictures that fans see on Instagram. It’s the real-life moments of real-life people trying to find meaning in a mobile life. Finding stability in a transient existence; unconsciously clawing to find ways to detour around the rockstar archetype and just feel like a kid in a band playing with your friends.

All these in between hours excite me and I’m grateful for them. One late night in the van recently a man who I have great respect for and who happens to employ me currently told me: “Build your story.”

I’m 26 and I play music for a living. My story happens in the 23 hours I spend off stage.