Matryoshka is considered a traditional Russian souvenir, the most popular among Russians and foreign guests, but not everyone knows the history of the matryoshka. Is the universe just a nesting doll? The answer of the question is very tricky yet hidden in the origin of the dynamic creation.

Beginning of the creation

Matryoshka appeared in 1890. Its prototype was the chiseled figure of the Buddhist saint Fukurum, which was brought from the island of Honshu to the estate near Abramtsevo near Moscow. The figure depicted a sage with a head extended from long thoughts, it turned out to be detachable, and a smaller figure was hidden inside, which also consisted of two halves. In total there were five such pupae.

In the image of this toy turner Vasily Zvezdochkin carved the figures, and the artist Sergey Malyutin painted them. On the figures he depicted a girl in a sundress and a scarf with a black rooster in her hands. The toy consisted of eight figures. For the girl was a boy, then again a girl, etc. All of them were somehow different from each other, and the last, the eighth, represented a baby wrapped in diapers. The common name at that time was the name Matryona and so the beloved Matryoshka appeared by everyone.

The appearance of nesting dolls in Russia at the very end of the last century was not accidental. It was during this period that the Russian artistic intelligentsia began to seriously engage in collecting works of folk art, and also tried to creatively comprehend the national artistic traditions. In addition to the zemstvo institutions, private artistic circles and workshops were organized at the expense of patrons of art, where masters were trained under the guidance of professional artists and household items and toys were created in the Russian style. Interest in the nested doll is explained not only by the originality of its shape and decorative painting, but also, probably, by a peculiar tribute to fashion for everything Russian, which spread in the beginning of the 20th century thanks to the “Russian seasons” S. Diagilev in Paris.

The annual fairs in Leipzig also contributed to the massive export of nesting dolls. Since 1909, the Russian nesting doll has also become a regular participant in the Berlin exhibition and the annual handicraft market, which took place in the beginning of the 20th century in London. Thanks to a traveling exhibition organized by the Russian Society of Shipping and Commerce, residents of the coastal cities of Greece, Turkey and the countries of the Middle East got acquainted with the Russian nesting dolls.

The painting of nesting dolls was becoming more colorful and diverse depicted girls in sundresses, in scarves, with baskets, knots, bouquets of flowers. Matryoshka dolls depicting shepherds with a pipe and bearded old men with a big stick, a groom with a mustache and a bride in a wedding dress appeared. Fantasy artists did not limit themselves to anything. Nested dolls were arranged in such a way as to respond to their main purpose – to present a surprise. So, inside the matryoshka “Bride and Groom” were placed relatives. Matryoshka could be confined to certain family dates. In addition to the family theme, there was nesting dolls designed for a certain level of erudition, education.

The history of nesting dolls

The history of nesting dolls began when, in the nineties of the 19th century, his wife brought a figurine of the good-natured, bald old sage Fukurum to Japan at the Mamontov’s Moscow Children’s Workshop “Child Education”. It is believed that this particular toy served as a prototype of the modern doll.

In general, Japan is a country of many gods and each of them is responsible for something: either for the harvest, or helps the righteous, or is the patron of happiness and art. Four more figures of his famous students were invested in that detachable figure of an old sage. 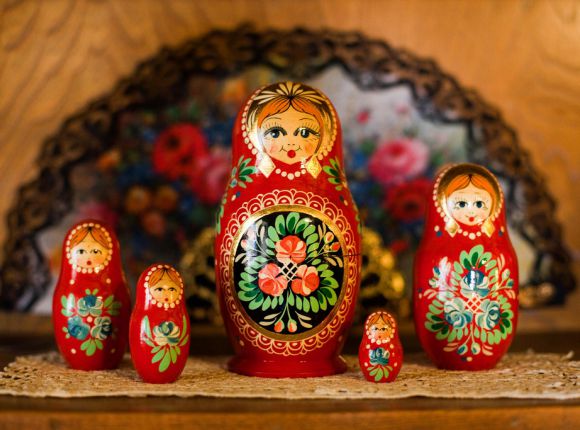 Whole sets of god figures were popular then in Japan. Fukuruma, a bald old man was responsible for happiness, prosperity and wisdom. If you try to trace further, then the roots from Japan will go to China, to India, where split, hollow dolls were also popular. In China, carved bone balls have long existed.

Sergievskaya or Zagorskaya (in 1930 Sergiev Posad was renamed Zagorsk). In Sergiev Posad, the first matryoshka was born. The Sergiev doll is always a chubby girl in a headscarf, tied with a knot, a patterned sweater, an elegant sundress and a floral apron. Her painting is verybright, based on 3-4 primary colors – yellow, red, blue and green. Her clothes and face usually have a black outline. She signs with gouacheand varnishes. The most famous workshops for the manufacture of matryoshka dolls in this area are the Epiphany, the Ivanovs, and the artel of the Workers ‘and Peasants’ Red Army. If you’d like to checkout different collection of nesting dolls visit Nestingdolls co